I was born in a small hospital in Brunswick. Three months later my grandparents left the island of Lipari (one of the Aeolian Islands off the northern coast of Sicily) to come and see me. Thousands more Italians, Greeks, Poles, Dutch, and lots more from a lot of other countries came as well. I felt loved. 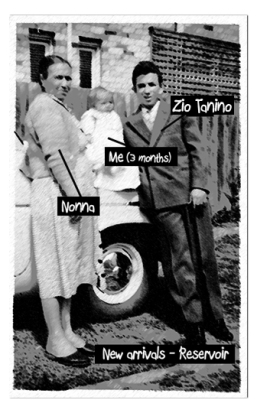 With my parents, grandparents and uncles we lived in a small weatherboard house, owned by my Zio Nino (who had come years before when he was only 16), in Reservoir.

When I was four years old I followed the cat under the house. I didn’t realise that a search had begun to look for me. When I finally emerged with the cat everyone was relieved but very angry with the cat.

I did not take well to school. I missed watching television with my grandfather and listening to my grandmother’s stories. So prep was very traumatic. Mum would drop me off at school only to find me waiting and smiling by the front door. After my second escape the  teacher worked out that it was best she held my hand until we were in class and then she could shut the door.

At twelve I discovered the Paleo diet. (I was well ahead of the times.) I also discovered fire at the same time. While my parents were out I had a craving for steak. I quickly discovered that oil catches fire. I also learnt that you do not throw water on hot oil. Unless you want your Mother’s curtains to disappear. When my parents came home they were relieved to find me unharmed. But they were very angry with the curtain makers.

While at high school I discovered music and made friends with people who wanted to be bigger than the Beatles. Unfortunately that didn’t happen but we did become bigger than a beetle. I had to find a career. I loved music, drawing, photographing and writing. When my Dad asked me what I wanted to do I told him I wanted to move people. That’s good he said, there’s a lot of money in real estate.

I didn’t get into real estate but I did fall into television where I have been working as a graphic designer for over thirty years across three channels. I’m still working in television. I also got married and I’m surrounded by my incredible wife and two daughters. (there are days when they are not so incredible), but there is no way you going to hear me complain while my wife checks my blog.

I have been very lucky.

And now I want to write and draw. And move people.